A recent discovery of Tutankhamun's tomb suggests that there are hidden rooms in the tomb, which may lead to an explanation of the questions raised about the young pharaoh's life and death, and his place in Egyptian history.

Archaeologists believed that the last burial chamber in the Valley of the Kings had been discovered even before Howard Carter's 1922 discovery of the tomb of Pharaoh Tutankhamun, which had never been touched before. King Tut ruled Egypt for only one decade from 1332 to 1322 B.C. and died at the age of nineteen.

In November 2015, radar expert Hiro Katsu Watanabe conducted a series of radar scans of the cemetery's land, and the results of these radar scans showed the possibility of other burial chambers hidden behind the walls of the young king's tomb. The use of ground-penetrating radar is known to be extremely difficult in the Valley of the Kings because of the rocky terrain. According to Zahi Hawass, the former minister of antiquities, natural cracks in the rocks can reflect radar waves in a way that may make them look like man-made chambers, so another round of radar scans is needed to make sure they are there.

At first glance, Tutankhamun may seem to be a minor figure in Egyptian history, as he is rarely mentioned in the writings that recorded this history, but he ruled at a time when his nation had undergone a radical change. Pharaoh Akhenaten, whose reign expired four years before The Tut's reign began, changed the official religion of Egypt, which was engaged in worshipping many gods, to the worship of one god, Aton, the sun god, which had the greatest effect on withdrawing power from the traditional Priests of the Egyptian gods who enjoyed wealth and influence. However, the Egyptian nation soon returned to worship its traditional gods after Akhenaten's death, and during this movement, Tutankhamun sat on the throne of Egypt.

Like any discovery, Tut's tomb has raised many important questions about Egyptian history, such as the search for the king's ancestors and successors, the possibility of other people buried in his tomb, and the question: are there other burial chambers that have not yet been discovered — the answers to some questions about the life of King Tut and his relatives — are close, while some other secrets of his life will remain shrouded in mystery.

Around 1341 B.C. during the reign of Akhenaten, a royal child was born, named Tutankhamun Aton, which means the living image of Aton, and was renamed after Akhenaten's death according to the traditional religion of sun worship, and Tutankhamun became.

Some researchers believe that the young pharaoh's mother is the main wife of Akhenaten, Queen Nefertiti, while others believe he is one of his other wives (marginalized) named Kia. But The Fatherhood of Tutankhamun's Brothers to Tutankhamun herself is uncertain. There is a possibility that Tut's father was pharaoh Samenkh-ka-ra, who ruled just before Tutankhamun.

The test of many mummies found in the Valley of the Kings proved that Tut's father was buried in the opposite cemetery in the valley (55KV), and his mother is buried in a cemetery relatively far from the west (35KV), but the identity of these two mummies remains unknown.

Identifying the true parents of Tut may help to reveal the kind of royal machinations that surrounded him and made him rule at the age of nine.

If another mummy had been found in Tut's tomb, the identity of the owner could be identified through the inscriptions engraved on the contents of the burial ground, thereby helping to solve this mystery.

Who ruled before Tutankhamun?

At the end of his reign, Akhenaten was appointed as an auxiliary ruler called Nefer Neferatan, who may be Nefertiti herself but under another name, who has ruled the country after His death for three years and was then captured by a controversial figure named Samenkh-ka-Ra, who some researchers, including Nicholas Reeves of the University of Arizona, believe that Samenkh-ka-ra is indeed one of Nefertiti's aliases. Another possibility is that one of Akhenaten's relatives is male; if an older burial chamber is found to have been separated by a wall to widen the site of Tut's tomb, the mummy may be identified as the one who had done tut in the judgment.

Who ruled after Tutankhamun?

Tutankhamun died suddenly at the age of 19 without leaving an heir. The inscriptions show that he was married to Ankh Essen Amon, Nefertiti's daughter, who is likely to have been his half-sister, had two daughters who died shortly after their birth, and whose mummies were found in Tut's tomb. Tut's death may have left his wife in a desperate position, possibly the one who sent a letter to the King of Theres, who ruled what is now Turkey and Syria, asking for a groom to share the throne of Egypt, in a last-ditch attempt to hold on to power; the documents show that the Emir of the Recitals, Zananza, was sent, but lost on the way.

According to Eaton Krauss, the timing of this letter is unknown, and Nefertiti may have written it to ask for a co-judge before she took over for herself and took the title of Pharaoh of Egypt.

There is still little chance that any new burial chambers will reveal who wrote the letter in particular, but Egyptian scholars are certainly strongly determined to reveal the mystery surrounding King Tut's death and its consequences.

was tut's tomb built for him or someone else?

For some scholars, including Reeves, Tut's tomb appears to be a little small to include the remains of one of Egypt's pharaohs. Some believed that after the completion of one of the tombs, Tutankhamun's sudden death forced them to hastily re-prepare them. Although the cemetery contains a vast wealth of art collections, only one of the four burial chambers has been painted and painted with plaster, while the rest of the royal tombs at the time were fully designed and decorated. The drawings in Tut's tomb depict the early stages of his soul's transition to the afterlife (life after death). According to Reeves, 80% or more of their burial holdings contain signs of being removed from those of former rulers, including Akhenaten.

Reeves also believes that instead of building an extended tomb for Tut, the builders may have separated and allocated part of another large cemetery; He is Nefertiti, who was buried as the Pharaoh (Samenkh-ka-ra), and Hawass argues that Nefertiti's prominent role in the worship of God Aton makes it difficult to believe that it can be buried in the Valley of the Kings, the holy place of god Amun.

Are there others buried with Tut?

Reeves shares the optimism of a few researchers about the possibility of containing any new burial chambers on Nefertiti's tomb. Although finding her mummy under any name promises a great opening to the study of ancient Egypt, the possibility of finding something different in these stacked rooms remains. Frank Rowley, from the University of Zurich, Switzerland, worked on an extensive study of Tut's mummy, compiling a list of royal figures who could be there; The presence of any of these mummies may more clearly indicate the kinship of King Tut. There is also the possibility that these rooms may not be just storage rooms; in any case, the existence of these rooms carries countless possibilities for what you can tell us about King Tut. As Eaton Krauss says, "The only certain thing about Tutankhamun is that he is dead."

How did King Tutankhamun die?
The important question of how Tutankhamun died remains, and we don't expect to get an answer through any of the contents of the newly recovered rooms. Rowley's DNA tests showed that the young king had suffered from malaria, and a CT scan showed that he had a rare bone disease that affected his right foot and made her look disfigured. There were 130 walking sticks found in Tut's tomb, and there was evidence of his use during his lifetime.

According to Rowley, neither of these diseases is necessarily deadly, and he believes that the best explanation is a severe fracture of his leg. He suffered a severe fracture in his knee that caused the bone to penetrate the skin, causing severe bleeding. Although the idea of a fatal leg fracture confirms the king's sudden death, Rowley cannot medically confirm that the fracture occurred during Tut's life, which may have occurred after his death.

Rowley asserts that understanding and evaluating Tut's health will affect the researchers' view and assessment, in the sense that he was a strong and active pharaoh who led the armies in battle, or was he just a weak mock ruler manipulated and exploited by those who were greedy in the Governing Council, and older than him?!
Rowley hopes to be able to conduct an extended and more thorough examination of Tut's body so that he can gather more information about his health and therefore find out the cause of his death. 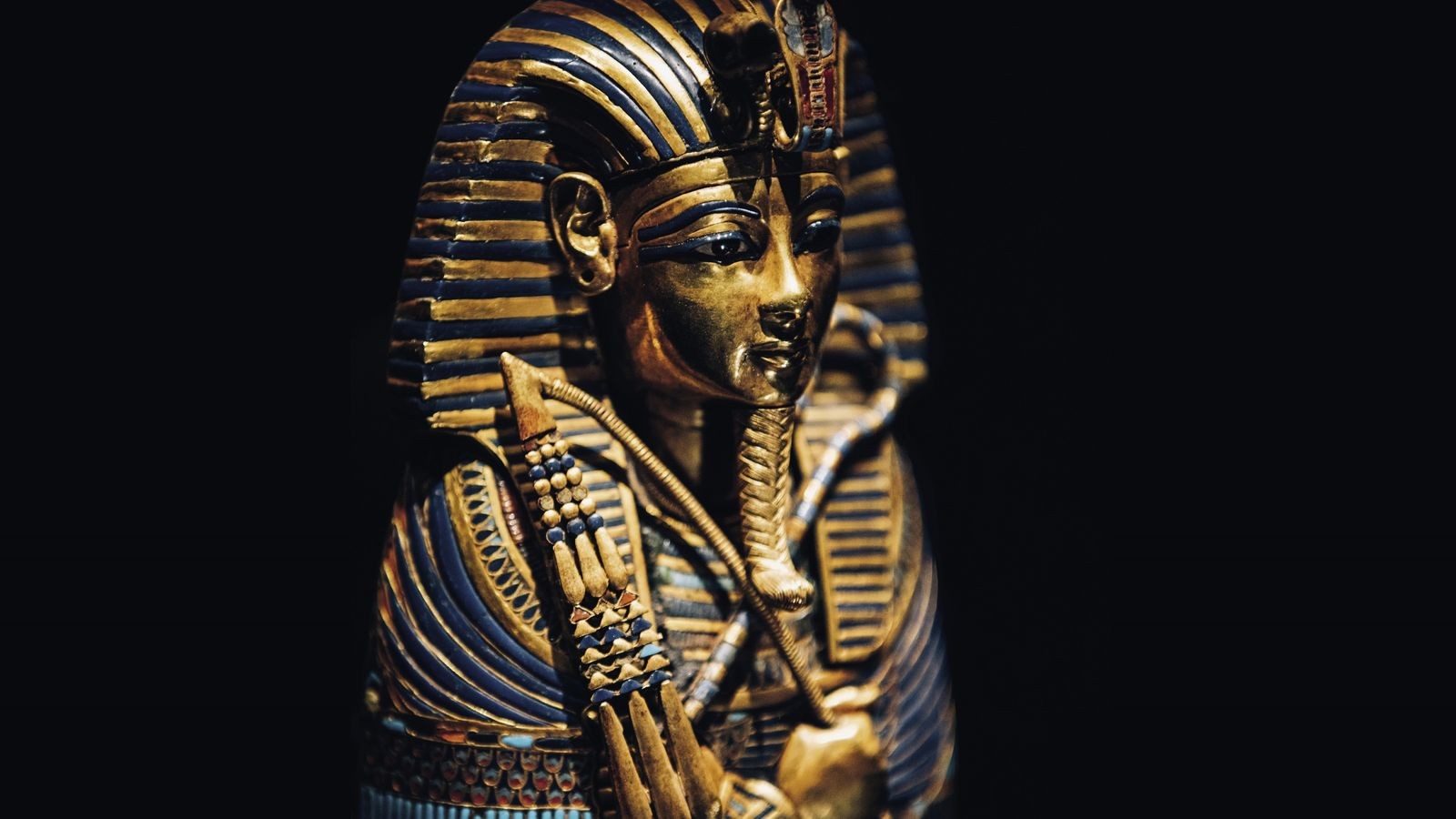