AKHENATEN (1352–1336 B.C.)   Called the   “her-etic pharaoh” because he changed the religion of ancient Egypt, Akhenaten was the first known mono-theist in history. He believed there was only one god, the ATEN. Soon after he was crowned king, he changed his name from Amenhotep IV to Akhenaten, meaning “Aten is on the horizon.” He then raised  the little-known god, the Aten, meaning “disk of the sun,” to the supreme god in the religion Akhenaten was the son of Amenhotep III, a pleasure-loving   king   who  devoted   his  life   to  building

Akhenaten, the “heretic king,” changed the religion of Egypt from many gods to one and was the first known monotheist in the world.  (Photo by Pat Remler)

temples, and Queen  Tiye,  a  strong-minded woman if her portraits tell us anything about her personality. Akhenaten’s ideas were revolutionary, and from his statues, we can see that his looks were different as well. Instead of an idealized king with a perfectly proportioned body, images of Akhenaten show a long, thin face, slanted eyes, thick lips, pointed chin, and a scrawny neck. He had breasts, a swollen belly, wide hips, and spindly arms and legs. This highly unusual and perhaps realistic portrayal of the king became an artistic fashion as Egyptian art changed to a more realistic style under his reign.

It is not certain when Akhenaten began to worship the Aten. There were references to the Aten during his childhood: Akhenaten’s mother, Queen Tiye, had a pleasure boat named The Aten Gleams that she sailed on her private lake. Right after his coronation, Akhenaten made it clear to everyone how important the new god was. He began building temples to the Aten next to the temple of the traditional god AMUN, at KARNA& TEMPLE, a group of religious buildings in Thebes

The Aten was unlike any god the people had ever worshipped. Represented as a sun disk with rays of light reaching down and ending in hands holding an ANKH (the sign of life) and WAS SCEPTER (the sign of power), it bestowed light and warmth upon the king and his family. Unlike the traditional gods of Egypt, however, the Aten was an abstract god without personality.

Akhenaten and his followers left Thebes, the capital of Egypt, and traveled north to a remote desert site about halfway between modern Luxor and Cairo to build a new city in the desert, called Akhet- Aten, “the horizon of the Aten.” The king erected boundary markers called stele that described how the Aten directed him to build the holy city on this site. Akhet-Aten was one of the most beautiful cities in the ancient world, stretching for five miles along the Nile. There were extra-wide streets for the king’s chariot procession and planned neighborhoods with houses for the laborers, administrators, and nobles of the court, as well as several palaces for the royal family and temples for the Aten.

The Aten temples were unlike any other temples in Egypt. There were no roofs and no sanctuary, or “holy of holies,” for the god. Completely open, their vast courtyards were filled with sunshine and altars for offerings to the Aten.

Akhenaten and his wife, Queen Nefertiti, had six daughters. Akhenaten’s happy isolation lasted only a dozen years, as one by one, five of the princesses and Nefertiti died. When Akhenaten himself died after reigning for about 17 years, Tutankhamen,  his probable young son by a second wife, became pharaoh. Egypt returned to the old religion, and the city of Akhet-Aten was abandoned when the capital was moved back to Thebes.

It has been said that Akhenaten was a man born before his time and that his ideas were too revolutionary to be accepted in conservative Egypt. He changed his name, the art style, the religion, and the capital. In so doing, Akhenaten’s legacy to the world was monotheism, a new art style, and his beautiful prayer praising the Aten (see HYMN T0 THE ATEN). 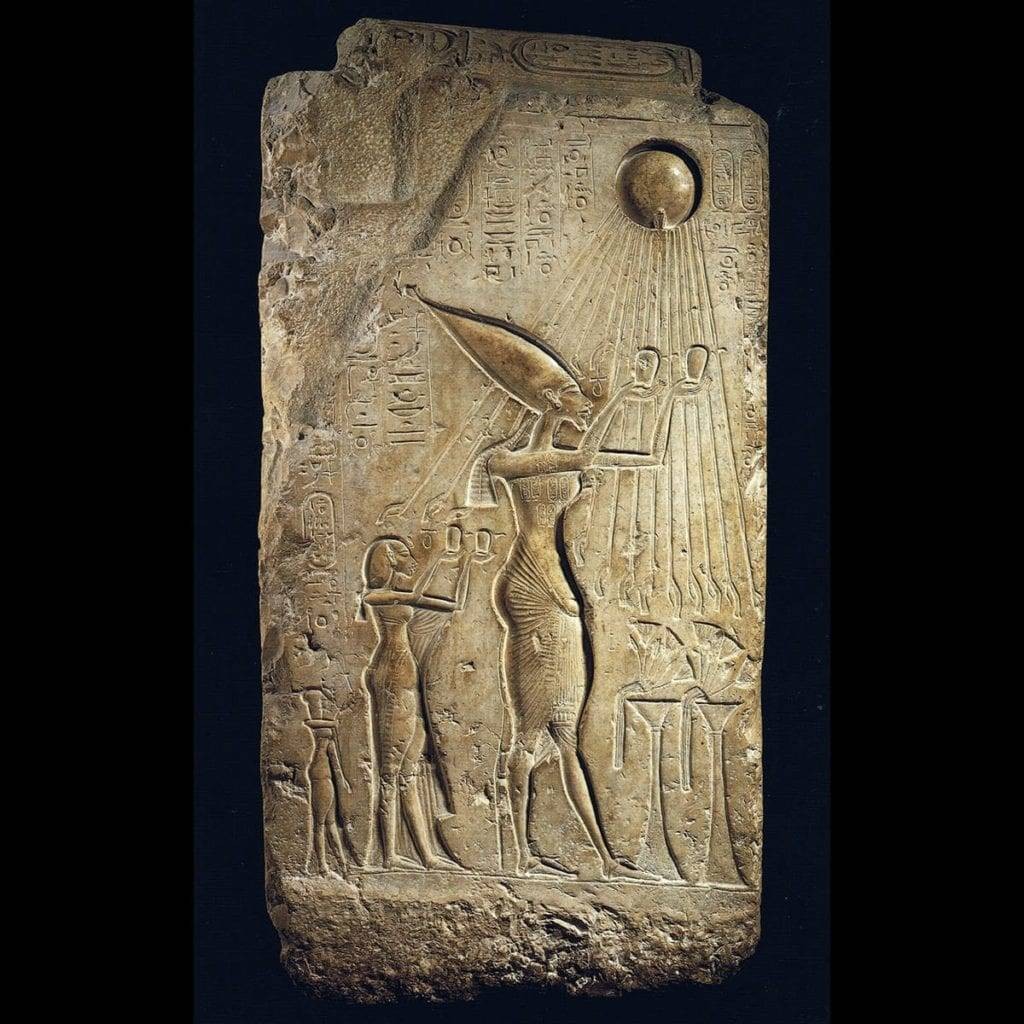