The Journey of the Holy Family to Egypt

The Journey of the Holy Family to Egypt - Unique Egypt Bolg

The Holy Journey to Egypt

Egypt is unique in many different historical events, and perhaps the most important of these events is the journey of the Holy Family to Egypt, where Egypt was blessed on this journey by visiting Jesus Christ, Mary, and Youssef al-Najjar, who was faithful to them and escaped with them from the tyrants who tried to kill the little Christ and shared their journey during this journey in the land of Egypt in the north, south-east, and west, and in many places that have been immortalized in history and have become known as the paths of the Holy Family in Egypt.

The Holy Family found safety and protection on the territory of Egypt and the Gospel immortalized all the events of the family on Egyptian soil, so the family granted blessing to the people of Egypt, as mentioned in the Holy Bible.

The holy family's journey in Egypt lasted two years, six months and ten days and included 25 routes stretching 2,000 kilometers from Sinai to Upper Egypt, so there are many monasteries and churches, as documented in manuscripts and religious sources, and the journey ranged from a week or a few days in some cities and in others settled for a month and the longest time in Mount Qasqam and extended about 186 days.

The holy family entered Egypt to escape from Palestine and the Israelites who tried to kill the child Jesus, son of Mary, and there were three known ways that the traveler from Palestine can take to Egypt, as described in the Coptic historical shrines, but the family when it came did not take any of them, but they took another route of their own, and this is for fear of being caught, so the journey began through the road of Al-Arish, Al-Farma, Tal Basta and Masdar, and arrived in Babylon or ancient Egypt as it is now known, and then moved on, They went back to The Valley of Natroun for a while, and then they went back north, passing through wadi al-Natroun. Belbesin and Samenoud are in the Delta and then back through the Sinai to Palestine again.

The first land that received the escaped family is the land of Rafah, a border city between Egypt and Palestine and away from the city of Al-Arish to the east about 45 km, and traces of this journey and traces of the holy family were found, then the family moved to Al-Arish and then Farma, which was the last stop for them in Sinai, then moved to Kantara. Egypt was ruled then by Janice Tuanius, the Roman ruler, and then arrived near, and then went west to the Valley, then arrived near Ismailia. They arrived in the town of Heron Polis near Abu Kassir.

The journey continued until reached Gharbia, where the city of Smnood and rested under a tree built by the Church of the Virgin and martyr Abanup in the 4th century A.D, the journey went to the village of Sakha. The Holy Family later crossed the Nile west to Desouk and headed south to Albahiyra, until they reached Tarana near Khattaba. Then wadi al-Natroun. They crossed the Nile again south until they reached Alkanater to Heliopolis, Matria, and Ain Shams. They then crossed into what is now Al Maadi, where the Church of the Virgin is now in it. The Holy Family then went to the city of Manf and then the Bahnsa. Then to Jabal al-Tair, one of the most important stations of the Holy Family after Abu Serja and The Muharraq. The journey ended in Mount Darnaka with a carved grotto and was the last leg of the family in Egypt, where it was reported in the church history books that the angel appeared to Youssef al-Najjar and ordered them to return to their homes in Palestine.

Egypt embraced the Holy Family, which granted its land, land, and trees to contain the holy family that blessed it and blessed its people in the Bible.

Check out now our Egypt tours and Egypt travel packages, also you can customize your own Egypt excursions. 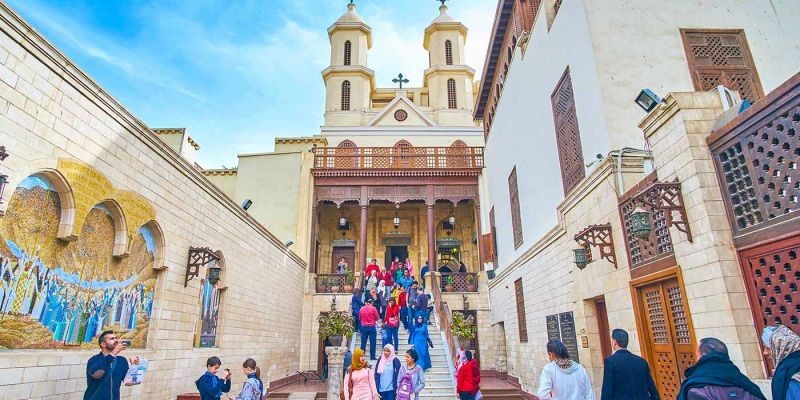