What Is Apis Bull?

animal as a god. The Apis was a special bull believed to be a god by the ancient Egyptians. He was worshipped during his life and then mummified when he died.

The cult of the Apis was central to Egyptian religion and dates from Egypt’s earliest settlements. Because of its strength and virility, the bull was associated with the pharaoh and his divinity. The cult of the Apis, associated with PTAH, the creator god of Memphis, was very popular during the reign of the Ptolemies, Greeks who ruled Egypt from the city of Alexandria (332–32 B.1.).

According to the  Greek historian  Herodotus,   a  bolt of lightning came down from heaven and

impregnated the mother of the Apis. The  Apis calf had special markings: It was black with a white diamond on its forehead, an eagle on its back, a scarab under its tongue, and split tail hairs.

There was only one Apis bull alive at any time. When the bull died, all of Egypt mourned, and a search for the new Apis calf began. In general, the Egyptian religion was based on the idea of resurrection: When a person died, he or she could resurrect in the next world. When the Apis bull died, however, the Egyptians seemed to believe in reincarnation, that the bull would be born again in this world in the body of another bull.

During its lifetime, the Apis wwere werepampered, per- fumed, and adored each day in luxurious surroundings at the temple complex in Memphis. The cow that gave birth to the Apis was also venerated and associated with ISIS as a divine mother; when the cow died, it was buried in a special tomb called the Iseum.

When the Apis bull died, it was mummified on a huge alabaster table, and several of these mummified- tables can still be seen at the site of the ancient city of Memphis. After the rites of mummification, the Apis was taken in a sacred procession to a special burial place, the SERAPEUM, an extensive underground cavern at SAQQARA that held the granite sarcophagus of each Apis bull. After death, the Apis became one with OSIRIS and was called Osirapis (see SERAPIS). The Apis bull was one of three sacred bulls in ancient Egypt.

The cult of the Apis bull was so popular and so important to the Egyptians that when the invading Persian king Cambyses (ruled 525–522 B.c.) reached the city of Memphis, he could think of no greater insult than to kill and eat the Ap. 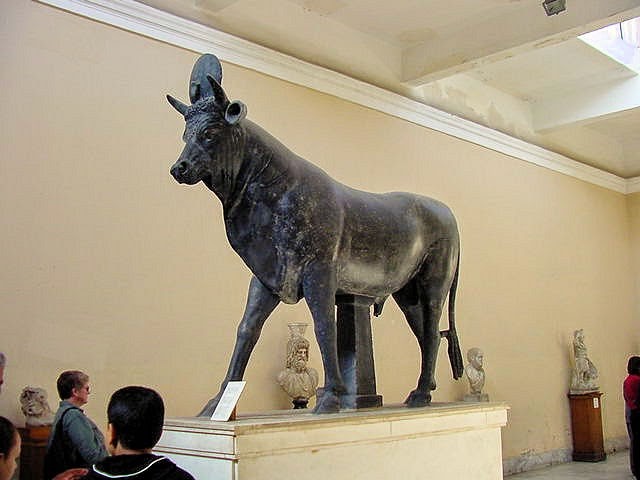