What is Amarna? - Unique Egypt Blog

AMARNA (also AKHET-ATEN or “Horizon of the Aten”) Amarna was built by AKHENATEN (the heretic king) as a cult city to honor his new god, the ATE whose motto was: ankh m maat, or “living in truth.” Worship of the Aten brought with it a new art style. Emphasis was placed especially on “truth in nature.” Artists and craftsmen abandoned the traditional static style of depiction and began painting scenes from nature and carving lifelike natural statues of the royal court.

When Akhenaten (1352–1336 B.C changed Egypt’s religion from the worship of many gods (polytheism) to the worship of one god (monotheism), he claimed he was guided by the Aten. Akhenaten moved his court from the old capital city THEBES (modern Luxor) to a new desert location some 200 miles north. Akhenaten marked the boundaries of his new city with 15 stelae (stone slabs). Some stelae were carved into the limestone cliffs like shrines; others were actual stone slabs erected along the east and west sides of the NILE. On the stelae, Akhenaten recorded his vow never to leave the holy city of Akhet-Aten

beyond it southward ever. The middle stela . . . [Eastern] I shall not pass beyond it eastward ever. The northeastern stela . . . I shall not pass beyond it northward ever. Likewise from the southwest stela of Akhet-Aten to the northwest stela on the western mountain [he will not pass beyond the western stelae] within these four stelae from the eastern mountain to the western mountain is Akhet-Aten itself. It belongs to my father, [the Aten] who gives life forever. I shall not violate this oath which I have made to the Aten my father in all eternity. Amarna was built on the east bank of the Nile, with three broad streets parallel to the river. Wide enough to accommodate the great chariot processions of Akhenaten and his queen, Nefertiti, the Royal Road was the main street. Because it was a planned city with defined neighborhoods (called the North and the South Suburbs and the Central City), Akhet-Aten grew in an orderly way. Akhenaten’s royal palace, official buildings, the Great Aten Temple, and the Small Aten Temple were in the Central City—the hub of all activity. Officials and nobles lived in the North and South Suburbs. The famous Nefertiti bust, now in the Charlottenburg Egyptian Museum in Berlin, was found in the South Suburb house of Thutmose the sculptor, along with other portraits of the royal family.

Because Amarna is one of the most thoroughly excavated sites along the Nile, Egyptologists know a lot about ancient life there. At the height of Akhenaten-E- en’s reign, the city had about 20,000 people. All of the buildings were constructed of mud-brick with plastered walls, except for the Great Aten Temple called Gem-Pa-Aten (the Aten is Found). Its facade was gleaming white limestone. The temple complex included several structures, open courtyards, and 365 altars for offerings from UPPER EGYPT and from LOWER EGYPT (see SUN UPPER). The great palace (Mansion of Rejoicing in Akhet-Aten) for receiving foreign dignitaries and conducting palace business was at the end of the Royal Road. A bridge over the Royal Road connected the main palace with the king’s living quarters, and the bridge may be the site of the “window of appearances,” where Akhenaten and Nefertiti appeared to give necklaces of gold to the Aten’s faithful followers. A smaller Aten temple next to the king’s living quarters was called hwt-aten “Mansion of the Aten” and was probably used exclusively by the royal family.

Houses in Amarna were usually square-shaped, with a large open courtyard in the center. Reception rooms, bedrooms, storage rooms, and a kitchen with a clay bread oven were all built around the open courtyard. Houses of the nobles and wealthy citizens had tall enclosure walls designed with multiple purposes for security, roof terraces, and bathing rooms. These walls were lined with limestone, and the floors slanted to form a basin. After the water was poured over the bather, it drained outside into a large jar. Some houses even had commodes After 17 years, Amarna was abandoned when Akhenaten died (1355 B.C.). One of the last remaining royal children was young Tut-ankh-aten, who later changed his name to TUTANKHAMEN and ruled from Thebes. 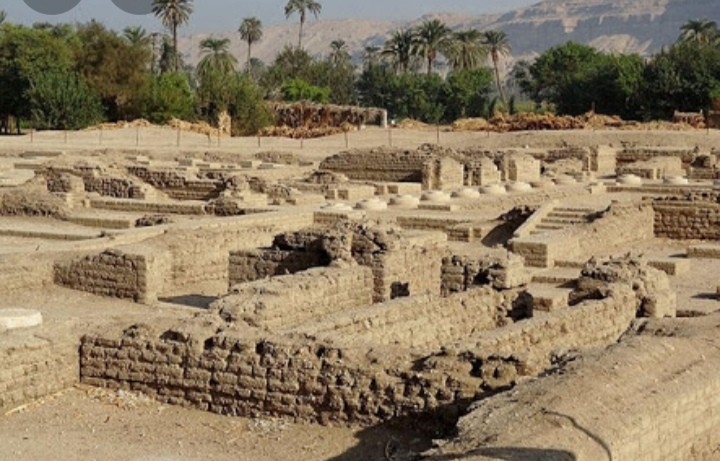