Book Of The Gate in Ancient Egyptian

Book Of The Gate in Ancient Egyptian - Unique Egypt Blog

BOOK OF GATES One of three major myths about the sun god compiled in the New Kingdom (1550–1069 B.C.), the Book of Gates refers to the 12 gates separating the hours of the night. It is a vast body of writings, spells, and incantations collected from the religious literature stored in temple libraries. The gates divide the 12 hours of the night and separate the enemies that the sun god will encounter. Similar myths tell a slightly different story of RE’s perilous journey through the 12  hours of the night and of his joyous rebirth in the eastern sky each morning  (see AMDUA and BOOK OF  DEAD). The Book of  Gates is dominated by giant serpents,  guardians of the gates, who assist the sun god during his journey, and by an “unquenchable fire” that will consume the enemies of Osiris. Early Christian descriptions of hell may have been derived from this   theme

In the Book of Gates, Re appears with a man’s body and a ram’s head when he approaches the first gate of the DuA, Each of the 12 hours of the night has a gate that is guarded by a particular serpent. Re must pass through the gate of each hour and overcome the perils of that hour before he can advance to the next gate. The following is a brief description of what is found during each hour of the night.

The First Hour The first gate is called “He whose Name is Hidden” and is protected by the serpent known as “The Guardian of the Desert” and is greeted by the souls of the dead who reside in the Mountains of the West.

The second Hour The second gate is called “Inten-  city of Flame” and is protected by the huge serpent Saa-Set, who opens the entrance so  Re, resting in a shrine on his boat, can pass safely through the gods and demons.

Third Hour The gate is named “Mistress of Nur- turing” and is protected by the serpent called “the Stinger,” who stands on its tail next to nine gods who are wrapped like mummies (mummy- form) and are called “the Second Company.”

Fifth Hour The gate is named “Mistress of Continuity,” protected by the serpent called “Eye of Fire” and two jackal-headed mummies called  Aau and Tekemi.

Sixth Hour The gate is named “Throne of her Lord,” protected by the serpent called the “All-Seeing Eye” and by 12 mummiform gods

Seventh Hour The gate is named the “Gleam- ing One,” protected by the serpent called the “Hidden Eye.”

Eighth Hour The gate is named the “Fiery Heat,” protected by the serpent called the “Face of Flames” and nine gods in mummy-form shape. Horus calls upon the monstrous serpent with the unquenchable fire to destroy the enemies of his father, Osiris, by burning their corpses and cooking their souls.

Ninth Hour The gate is named “Exalted in Veneration,” protected by the serpent called “Earth Tusk,” and the guardians of each end of the hall are Anhefta and Ermen-ta.

Tenth Hour The gate is named the “Sacred Gate,” protected by the serpent Setu. The guardians of the hall are the serpents Nemi and Kefi. It is here that the evil serpent, the archenemy of the sun god Apep, is met and subdued in chains

Eleventh Hour The gate is named “Hidden Entrance,” protected by the serpent named the “Effluent One,” and the hall is guarded by Metes and Chateau. The evil Apep is attacked with knives, and various gods of light and stars appear in preparation for the sun god’s return to the sky.

Twelfth Hour The gate is named the gate of “Sacred Power” and is protected by the serpent called “Lord of the Dawn and Enveloper.” The guardians of the hall are Pai and Akhekhi. Re-emerges triumphantly from the last hour of the night and proceeds to the eastern horizon to be reborn.

There are different versions of the Book of Gates. Those written in Thebes are called the T! EBAN RE&EN’()N, and those originating in Sais, the capital of the Site or Twenty-sixth Dynasty (664–525 B.&.), called the SA(TE RE&EN’()N, are the most common. In each case, the names of gates and the gods differ somewhat. An example of the text can be found on the alabaster sarcophagus of Seti I, now on display in the Sir John Soane’s Museum in Lincoln’s Inn Fields in London. 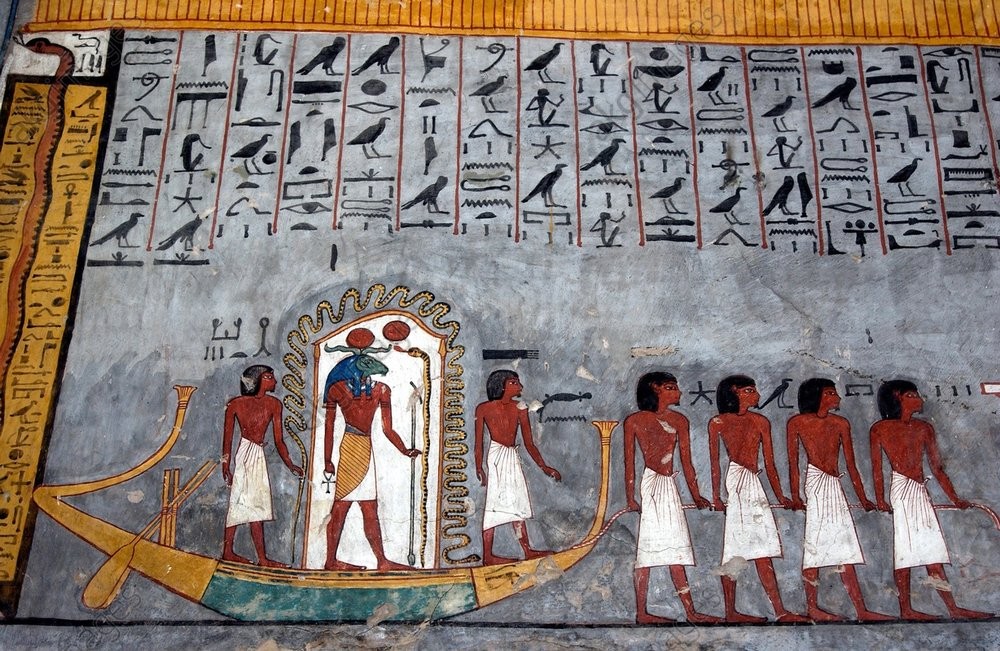