Book Of The Dead in Ancient Egyptian

Book Of The Dead in Ancient Egyptian - Unique Egypt Blog

BOOK OF THE DEAD an illustrated papyrus scroll placed in the tomb as a guidebook for the deceased during his perilous journey through the NETHERWORLD The Book of the Dead is a composite of ancient Egypt’s oldest and most important religious texts. Some of the writings come from Egypt’s Pre-dynastic period and were 4,000 years old during the time of Jesus. The Book of the Dead is not a book as we know it but consists of rolls of papyrus that contain a collection of spells, incantations, prayers, hymns, and rituals that were written by the priests over Egypt's long history. The various copies of the Book of the Dead contain about 200 different spells that have been given chapter numbers so that, for example, any spell dealing with “the heart not opposing the deceased” would be found in Chapter 30.

The Book of the Dead evolved from the PYRAMID TEXTS and COFFIN TEXTS. While the Pyramid Texts were magical spells for the pharaohs only, the Coffin Texts could be used by anyone who could afford to have a coffin carved or painted with magical inscriptions. Eventually, there were too many spells to fit on the coffin, and the Book of the Dead was the answer to the problem. Now all of the magical spells could accompany the deceased, for they could be written on papyrus and placed in the tomb with the mummy.

Scribes filled papyrus rolls with spells for protection as well as for instructions on how to behave and how to make the bodywork again in the next world. Generally, the Book of the Dead had four    sections:

(1) how to protect the body in the tomb; (2) how to make the journey to the Netherworld; (3) how to pass the judgment of the gods; (4) how to exist in the next world, after having been accepted by the gods.

About 200 different spells or chapters appear in the Book of the Dead, but they appear in no fixed order. Books are written in the north or the south of Egypt had a particular style. The actual title of the Book of the Dead is “The going fourth by day,” which might refer to the deceased going forth to the Netherworld. The Egyptians were fearful of the night, and it would have been considered an advantage to make the journey during the day. Whatever the title meant, it undoubtedly was a reference to death. The ancient Egyptians did not mention death directly but instead had many euphemisms or names for death and the deceased. For example, because the west bank of the Nile was associated with death (the sun died there every day, and the dead were buried in cemeteries on the west side), if someone died, it was said that he “went west.” The dead were called “Westerners” or “True of Voice.”

Many of the Theban versions of the Book of the Dead contain hymns to the gods, especially to OSIRIS the god of the dead. An abbreviated example of the hymn to Osiris, from the papyrus of Ani (a scribe in the Eighteenth Dynasty), reads:

Adoration of Re when he appears on the eastern horizon of the Sky.

Behold, Osiris, the scribe of the divine offerings of all the gods, Ani. He says, praise to thee who has come as Khepera, the god of existence who is the creator of the gods . . . May he gives pleasure and power as one who is dead. The living soul [of Ani] goes forth to see Horus of the two horizons, the soul of Osiris, the scribe of Ani, true of voice before Osiris . . .

This hymn of praise to Osiris mentions two important features of the deceased: the BA, which has been translated as “soul,” and the KA, which was a kind of spiritual double. The Egyptians believed a person had five different elements: the physical body, the shadow, the name, and, most important, the ba the ka ba was represented as a bird with the head of the deceased, and it seemed to come into separate existence only after the person died. The ba was essential for the deceased’s existence in the Netherworld.

An excerpt from the Book of the Dead. (Photograph by Manfred Werner)

The ka was a kind of abstract double of the deceased that needed a place to live. Its first choice was the corpse, but in case the body was damaged or destroyed, many Egyptians were buried with one or more ka statues carved in their likeness so the ka could dwell within the statue.

The Egyptians were almost encyclopedic in their concern with the various parts of the body. The Book of the Dead seems to have been written by priests who drew up a list of every body part that would be needed in the next world and then created a spell to protect it, as in the following examples:

The Chapter of Not Permitting the Head of a Man to Be Cut Off in the Netherworld.

I am the great one, son of the great one. I am fire, son of fire, whose head was given to him after it was cut off. His head shall not be taken away from him . . .

When the Book of the Dead first appeared in the New Kingdom, it was considered essential to anyone seeking immortality by resurrecting in the Nether- world. This belief in the Book of the Dead continued well into the period of the Greek occupation of Egypt. The texts themselves remained virtually unchanged for more than a thousand years. No doubt many who purchased copies of the Book of the Dead could not read them, but that was not of great concern. Having the magical words that would guide them safely to the Netherworld was the important thing. 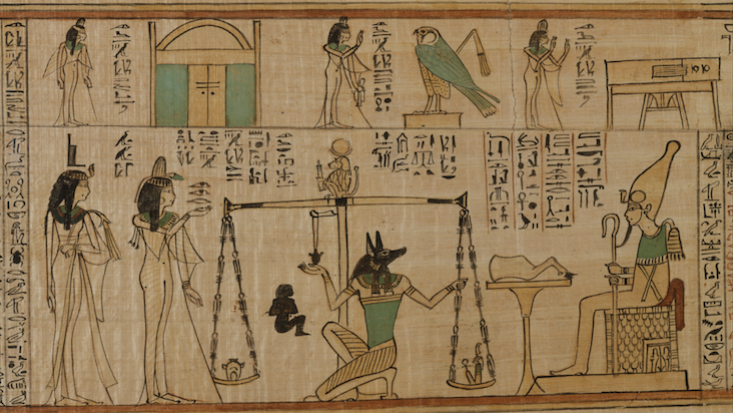