AMULET An amulet is anything worn or carried by a person for protection or good luck. In ancient Egypt, amulets were often small figures of the gods. Of all the magical objects used by the Egyptians, amulets were by far the most popular. Newborns were adorned with amulets to keep them safe and healthy, and parents placed amulets around their children’s necks to ward off evil spirits and protect them from scorpions, snakes, and crocodiles.

Amulets, made in hundreds of different shapes, were believed to have many different powers. Some amulets were purely protective, and their power came from the gods. If you wore a small cat amulet around your neck, for example, then the cat goddess, Bastet, protected you. The Egyptians believed that some amulets not only kept them safe but also gave the wearer special powers: If you wore a lion amulet, you would be brave, a bull amulet would give you strength, and an ibis or baboon amulet would help you gain wisdom and knowledge.

One of the most popular Egyptian amulets was the EYE OF HORUS, which was worn by the living for good health and also placed on the dead for regeneration. The Eye of Horus is shaped like a stylized falcon’s eye, and the Egyptian word for it is unjust, or “sound eye.”

good health and also placed on the dead for regeneration. The Eye of Horus is shaped like a stylized falcon’s eye, and the Egyptian word for it is unjust, or “sound eye.”

Faience amulets were produced in workshops all over Egypt. The first step was to prepare a mold.

A master amulet was carved, usually in stone, and pressed into a lump of soft clay. The clay was baked or fired until it was hard, and that became the mold used to make amulets. Any number of molds could be made from the master amulet, and any number of amulets could be made from each mold. A small lump of faience was rolled into a ball around a string and pressed into the mold. When the mold was fired, the paste hardened and the string burned away, leaving a hole so the amulet could be strung on a cord. Faience amulets came in many colors, but the ancient Egyptians favored shades of turquoise and blue

.Amulets changed over Egypt’s 3,000-year history. Those from the Old Kingdom (2686–2181 B.c.) tended to be hawks, hippopotami, or lions. Later, in the First Intermediate period (2181–2055 B.c.), amulets were often in the shape of body parts: arms, hands, feet, hearts, and eyes. The Middle Kingdom produced one of ancient Egypt’s most popular amulets, one that is still worn today: the SCARAB beetle.

During the New Kingdom, amulets represented the most popular gods. They were usually worn on a string around the neck or inlaid in other kinds of jewelry. The favorites were AMUN IsIs, HATHOR, BES, and TAURET.

Funerary Amulets Some amulets were made to ensure that the mummy remained intact and had the power to resurrect in the next world. The MacGregor Papyrus, a version of the BOOK  OF  THE DEAD, lists 75 funerary amulets and their uses. The list requires that each amulet be made of gold. Since gold doesn’t tarnish, it seemed the most enduring material to protect the mummy for eternity.

One of the most important funerary amulets was the DJED PILLAR, called the backbone of Osiris, which represents stability for the deceased. Chapter 155 in the Book of the Dead calls for a pillar of gold to be placed on the throat of the mummy, but often a string of faience or bone DJed amulets was used because gold was too costly.

Another important funerary amulet was the tet or the KNOT OF ISIS, sometimes called the “Girdle of Isis” or the “Blood of Isis.” During the Greek and Roman periods (332 B.C.–A.D. 395), Isis was identifiable by the distinctive knot on the front of her gown. The tet is often carved from a hard red stone like jasper or carnelian or sometimes molded in red glass. The Book of the Dead suggests the tet should be made of red jasper and dipped into the sap of the ankh-my plant. This plant is not known today, but the name suggests magical power, for it means

“overseer of life.” The ancient Egyptians believed that if the tet was inlaid in sycamore wood and placed on the mummy’s neck, the power of Isis would protect him or her.

A group of amulets called the FOUR SON OF HORUS were essential for the mummy. All four deities have the body of a man, but each has a different head. Messi is human-headed, Hapi is ape-headed, Duamutef is jackal-headed, and Qebesenef is falcon-headed. Amulets of these four gods were usually made of blue faience and had several holes on each side so they could be sewn onto the mummy wrappings. They were almost always placed across the mummy’s chest. Often, a miniature headrest made of hard stone was placed in the mummy wrappings to protect the head of the mummy and to help him or her arise to the next world. Small heart amulets were sometimes wrapped with the mummy to protect the heart and ensure that it did not speak against the deceased

when he or she made a plea before the gods.

Eye of Horus Eye of the falcon god Horus, worn for good health

Isis The greatest Egyptian goddess, who was the “Keeper of Secrets”

Maat Goddess  of  truth  and  justice, whose attribute was the feather of truth

Nefertum The god of the blue lotus blossom

Nekhbet The vulture goddess who protected the pharaoh

Nephthys The lady of the mansion and sister of Isis

Ptah is The god of craftsmen, and a creator god Ptah-Ek   Dwarf god protector of children 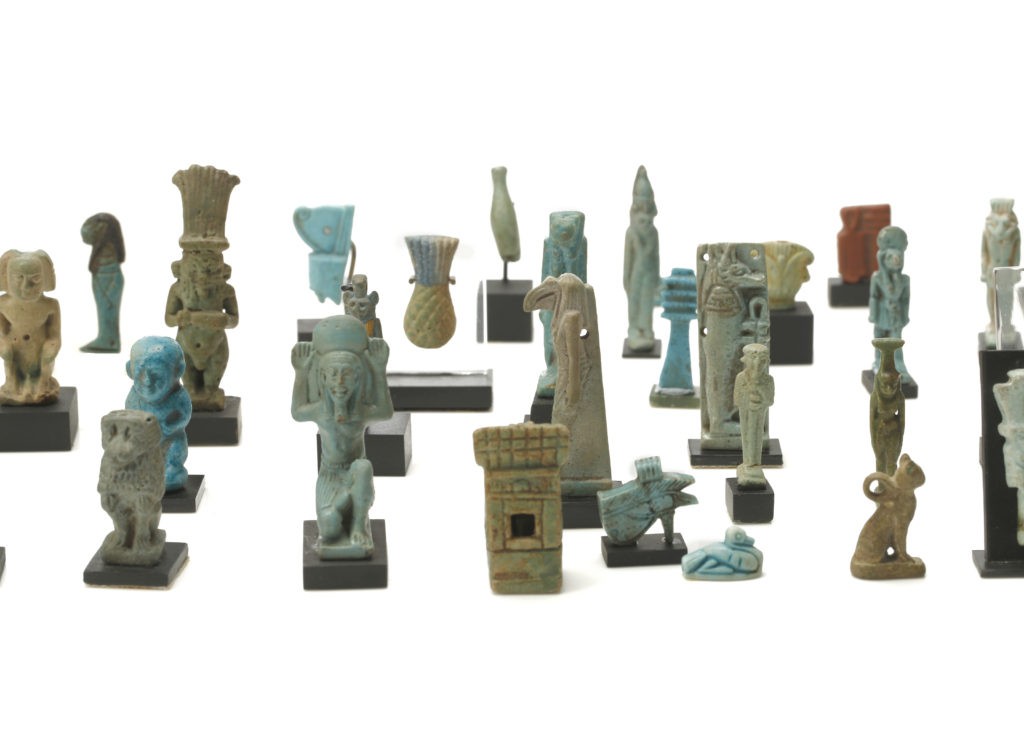