Who is Atum? - Unique Egypt Blog

ATUM Called the “undifferentiated one,” meaning both male and female, Atum was the primeval being and the creator of the world. Recognized as an early form of the sun god, Atum was called the “Lord of Heliopolis,” the ancient city that was the center for sun worship. Because of his association with the sun cult, Atum eventually merged with the sun god, Re, to become RE-ATUM. The creation myth from Heliopolis tells us that Atum emerged from NUN, the waters of chaos, onto the PRIMEVAL MOUND before heaven and earth were separated. From his semen, Atum created the first gods on land, Shu (air) and Tefnut (moisture). They in turn produced Geb (earth) and Nut (sky), whose children were Osiris and Isis (who were brother and sister and also husband and wife) and Set and Nephthys (who were also brother and sister and husband and wife). These first nine deities formed the Heliopolitan Ennead, a family of gods.

During the New Kingdom (1550–1295 B.C.), Atum presided over the coronation of the king, as shown on the walls of the Temple of Amun at KARNAK. In the BOOK OF GATES, Atum subdues the serpent Nekebu- Kau by digging his fingernails into the snake, and he confronts the evil serpent Apophis, condemning him to death. Atum protects the souls of the deceased when they travel through the Underworld.

Atum appears in human form, usually wearing the combined white and red crown of Upper and Lower Egypt. Often he was seated on a throne holding a staff of authority. The bull, lion, lizard, and ICHNEU- MON were sacred to Atum. 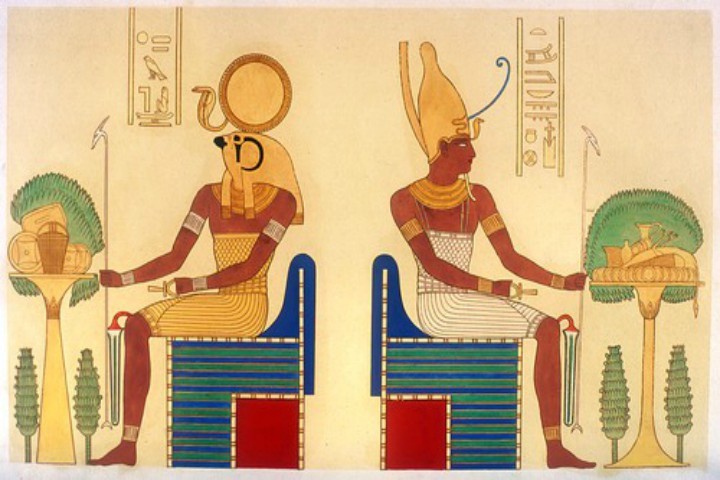